I’ve been meaning to write an article about gamer girls for quite a while now, but there have always been other things that somehow came in between. When I watched Justin Silverman’s gamer girl video [1] the other day though, I figured it would be a great time to write down my own thoughts.

Most of the things I am going to share with you are either observations or – being a “girl on the internet” myself – even experienced firsthand. 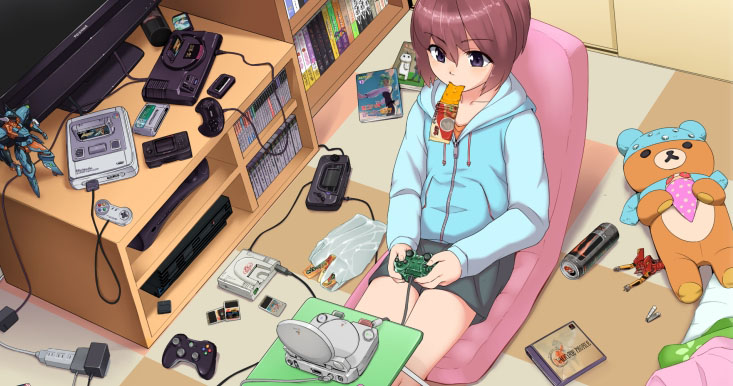 In Justin’s video, he talks about how the typical gamer girl is portrayed by some hot model wearing thick nerdy glasses, doing ‘kinky’ things.
Maybe you’ve seen some of those fake pictures yourself. A chick or group of chicks plays on some popular console having two tons of fun; but you can clearly see that nothing is even plugged in anywhere. Fail right there.

Another example would be all the “booth babes” that many companies hire for expos these days. Barely any clothes on and ‘representing’ these big firms; making sure to use one of the most basic human instincts – AHEMsexAHEM – to attract customers of the – often – male kind. 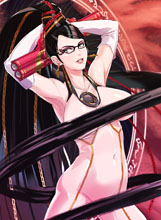 Now, I am not saying that there’s anything wrong with using “clever” ways of attracting customers and trying to stand out. If anything, you almost HAVE to do that these days. I am also not some “radical ‘feminist’” or anything, who feels like chicks shouldn’t wear sexy clothes. I am pansexual, so I will gladly admit that I like to look at all those nice girls myself; but I also like wearing sexy things as well! On top of that, Bayonetta was one of my most favorite characters of a game; and here’s why:

In Bayonetta’s case, yes, she was barely wearing anything and the little she did have on was very revealing, but stuff like that doesn’t bother me if it is not displayed as “ALL” a girl has to offer. And let’s be honest, the sexy witch from the same-named game was everything BUT “just that”. She is absolutely able to kick butts and defend herself; as much as she loves being sexually persuasive. That is exactly why I love her and she is even a little bit of a “role model” for me personally.

In cases of many “booth babes” or other hired “gamer girls”, this is often not the case. They are just there for one reason: decoration; eye candy.
Normally that’d wouldn’t bug me, because I am very open-minded, accepting and operate by the rule of “Whatever floats your boat”. What does bothers me is that many people will start to get biased and pre-judge girls. Think I’m exaggerating? Keep reading.

As some of you may know, I have a Let’s Play channel on YouTube and I was exposed to a lot of this “girl bias” myself. It starts with cheap pickup lines (because they apparently think that this is how they can “get” me); goes over to stalkerish behaviours and still doesn’t end at insults. I’ve had guys overanalyze me; thinking I am dumb or even less skilled than my male counterparts!
As an example, there was this one dude, whom I wanted to battle on a fun challenge; but he gave me the line of “how he was not interested, because I am not good at games”. Wait, WHAT?
This was not him saying that I suck, based on evidence he saw or anything. He just flat-out ASSUMED that I would suck, just because I am a girl (he even admitted it). Can you believe it?
And this is why I do NOT like the way girls and women are being used by some parts of the game industry.

I stumbled over a mod [2] for the overly popular game “Minecraft”a few weeks ago. It was a “girlfriend mod”, which was supposed to spawn female company for your game, but I absolutely hated the way girls were – once again – portrayed.

First of all, the actual sprites were in-game monsters (and yes, I do know there is a version where the girls look like actual people [3]). Second, if you talked to them, their avatar was the picture of an overly sexualized Anime / Hentai character, meaning – again – all it was meant to be for is arousement. Lastly, the third thing that really annoyed me is after talking to them for a while they’d get “bitchy” and start attacking you. So what the mod basically teaches: girls are only decoration for sexual arousement and if you talk to them, they’ll PMS and attack you. That, and nothing else, because sadly, these “girlfriends” didn’t have any other function / features at all.

Now before anybody tells me that I am overanalyzing, you might wanna sit down and think about this for a sec. Especially given how many players are still pretty young and very ‘influencable’.

So what could the developer of the mod have done better?
Well, I did some research after seeing that video and discovered an actually DECENT “female companion” mod [4]. Firstly, the girl looks like an actual in-game person and she was not overly sexualized either. Secondly, which is what I REALLY love: she has an actual function and can help you do certain in-game tasks! This definitely displays a girl’s worth as a human much better. =)

I really don’t dislike the sheer fact that the “booth babes” or fake “gamer girls” exist. I only hate how some will start to throw all females gamers into the same pot with them and thus think that they’re just there for sexual pleasures; staring; decoration; flirting or anything BUT being equals!

Many also won’t take people like me serious on their gamer skills and will instead always just kinda belittle us or laugh. I’m not the best, but neither the worst or even worse than my male counterparts! Go check any videos I’ve been part of and make your own judgement.

It just sucks if you are like me and like a nice challenge between friends or buddies; but then you either don’t get an opportunity or others will HOLD BACK in order to “give you a chance”. I don’t want people to hold back on me! I want them to give their best and if they do really beat me, then I am not afraid to accept the defeat and go train, so I can battle them again some day. That’s right, I’ll go and step up to the challenge, if I am really too sucky!

This is how it should be and it shouldn’t happen that gamer chicks either get tossed aside; made fun of; stalked / harassed or are constantly under trial and need to prove every single thing they say 24/7. If you boys don’t have to, then why should I have to?

To all my male colleagues out there who have never seen it from this angle or who have been kinda descendant to any fellow female gamers, I suggest that you try to break out of that biased thinking and go give it a shot. Don’t let the hired models – who often have NOTHING to do with gaming – let you tell what the whole rest of us is like. You’ll be glad.

Final disclaimer: I am absolutely by NO means saying that ALL guys are like what I described. If they were, I wouldn’t have a friend circle consisting to 99.99% of guys and I love those dudes.

Shopping Basket
Share via
The Bias Towards Gamer Girls
https://fiyahkitteh.com/articles-the-bias-towards-gamer-girls/

Necessary Always Enabled
Necessary cookies are absolutely essential for the website to function properly. This category only includes cookies that ensures basic functionalities and security features of the website and do not store any personal information.
Non-Necessary
Any cookies that may not be particularly necessary for the website to function and are used specifically to collect user data via analytics (IP address, browser build, OS, origin country, search engine and search words used). These are used to help me make my site work better on various browsers / systems and bring you content you are actually looking for.
SAVE & ACCEPT
Send this to a friend
Hey!
This might interest you: The Bias Towards Gamer Girls (https://fiyahkitteh.com/articles-the-bias-towards-gamer-girls/)