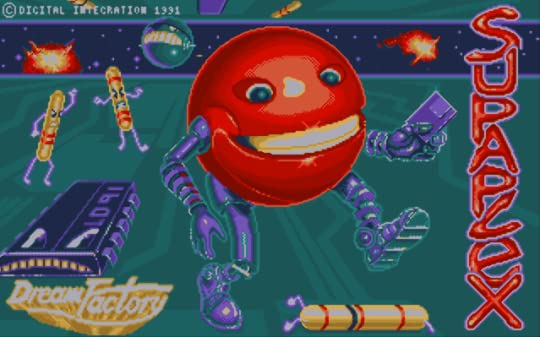 Be prepared for a journey to the faaaar past. ;D

Back when I was a kid, my dad used to have a computer where he’d play a lot of different games on. Being as curious as I was (and still am to this day!), he often let me try a round or two and in fact even gave me an own PC pretty early on.

So I am sitting there, playing “the game I saw him play”, which featured what I thought of as an orange with a face back then; just because I always put things simple.

The goal was to direct that ‘ball’ (his name is Murphy) through a maze-like setup of screens, eating up all the “Infotrons” (which honestly to me back then looked more like shiny, alien-futuristic computer insides of some sorts), while either avoiding all the scissors (“Snik Snaks”) that were after you; making sure the boulders you had to move – or anything else for that matter – wouldn’t fall on top of your head, ending up exploding you or you wouldn’t get stuck in some one-way pipe.

Sometimes you had to be pretty creative, which is where the puzzle aspect of this game comes in.

For example, there were various floppy discs placed all over some of the levels, that would explode when a boulder fell on top of them, allowing you to break through walls or piles of stones. The impact was so strong, that it would even destroy the “Snik Snaks” and – unfortunately – the Infotrons, which you wanted to absolutely avoid, because you had to collect a specific amount of them (translation: Usually all!) in every level.

By the way: when you had collected all the ‘shiny computer insides’, you still had to make it to the exit of the level, which was a yellow block with an “E” on it.

The stages start out pretty simple and easy, but become a complete cluster-fudge as you keep going. In total there were 111 official levels.

Generally, Supaplex was heavily based on a game called “Boulder Dash” (1984). It did come with some differences, however. For instance, ‘Supa’ did not have any timer, which is probably a good thing, given how much of a cluster some later levels were. ;D

I can personally highly recommend this somewhat forgotten, Swiss gem to anybody who likes a good challenge and would like to test their skills and patience at a good, old-style puzzle game.

Supaplex is distributed as freeware, these days, so it’s definitely worth a shot! =)

Necessary Always Enabled
Necessary cookies are absolutely essential for the website to function properly. This category only includes cookies that ensures basic functionalities and security features of the website and do not store any personal information.
Non-Necessary
Any cookies that may not be particularly necessary for the website to function and are used specifically to collect user data via analytics (IP address, browser build, OS, origin country, search engine and search words used). These are used to help me make my site work better on various browsers / systems and bring you content you are actually looking for.
SAVE & ACCEPT
Send this to a friend
Hey!
This might interest you: *Supaplex* (Atari | Amiga ST | MS-DOS) (https://fiyahkitteh.com/reviews-supaplex-atari-amiga-st-ms-dos/)